In light drizzle and a gentle southerly breeze Corentin Horeau (Mutuelle Bleue) made the best start to lead the 34 strong 2022 La Solitaire du Figaro fleet away from the mouth of the Loire estuary, opening a 648 nautical miles Stage 1 which – if the winds play ball – will take the solo racers north past Bishops Rock at the Scillies around Skokholm Island, a tiny bird sanctuary two miles off Wales’ Pembroke coast where they should turn south toward the stage finish in Port La Fôret where they should finish Thursday morning.

Only light to moderate winds are forecast for this, the first of three legs. With multiple small, weak fronts and many transitions expected only that southwards, returning leg to the finish seems relatively straightforward. There will be several chances for comebacks, transitions or light ‘park ups’ which should allow those who have lost early miles to make good their deficits. Certainly the first 24 hours will keep the solo sailors on high alert as they seek to interpret and respond to the small changes in wind conditions.

Britain’s top hope Alan Roberts (Seacat Services), a renowned inshore dinghy racer, was in the early fight, seeking to stay fast and clean in what proved a scrappy, intense departure circuit off Saint Martin Chef Chef. One hour after the start gun Roberts was seventh. Ireland’s Tom Dolan (Smurfit Kappa-Kingspan) made his most accomplished La Solitaire start yet and was in the early mix too in 11h, as was German rookie Sanni Buecke (This Race Is Female) still very much in her comfort zone as a Tokyo Olympic 49er FX silver medallist. Spain’s Pep Costa (Play to B-Terravia) was 12th.

Before leaving the dock in Saint Nazaire this morning early leader Horeau had said: “The weather forecast looks very complicated but that will leave everything open. Overall, we won’t have any big conditions to manage on this first stage with a few fronts to manage. You will have to be opportunistic. We need to keep something in reserve so as not to burn yourself out from the start because there are strategic decisions to be taken in Northern Brittany. But then we shouldn’t stress too much if you lose a bit under a small cloud, or in a little front. After Skokholm island there will be a nice slide downwind when we get into the North-North-West wind. We will run downwind well to Port-La Forêt ETA Thursday morning. It is not going to be easy but hopefully I can make my experience tell.” 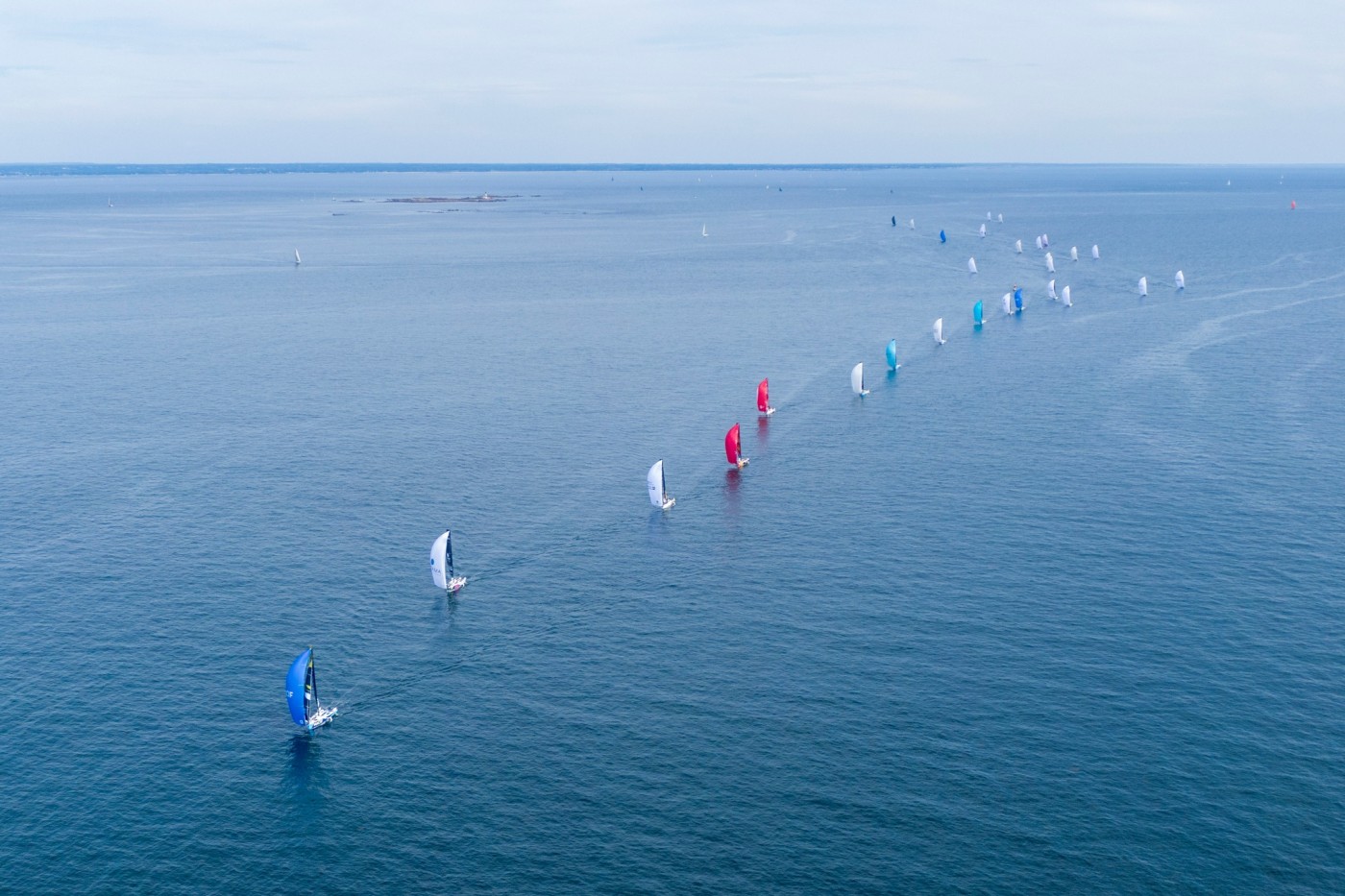 Unstable weather
‘The light weather of the start should give way to a southerly wind of eight to 12kts, veering to the SW and maybe picking up to 12 to 15 knots’ says the race meteo specialist Cyrille Duchesne of Meteo Consult, “It should stay fairly tight and direct along the coast with some maybe opting to go offshore looking for more wind.”

The Lorient Grand Large team’s weather adviser Marcel Van Triest summarises,
“There are multiple, multiple fronts. Even before the Chaussée de Sein there will be two or three low activity fronts. The first one will be around midnight around Quiberon and Belle Ile. There is a choice there. Then a second one where they tack at the south of Glenans. The first part of the race is not going to see any big changes, just a sequence of little lines coming through, all tacking at the same time. It is more interesting thereafter, a binary choice at Ushant at the Traffic Separation zone. To me it is 55 per chance in between the TSS and Ushant, 45 per cent outside.”

He continues, “Across the Channel it is lighter with a frontal boundary between Ireland and Wales, a vast area of not a lot of wind. It will eventually be cleaned up and becomes more like a proper front. At Bishop Rock it gets complicated as there is no wind straight on, so the routes become complicated and there is a good chance to catch up.”

The tidal ranges across the Bristol Channel are relatively low at the moment. The new front around Skokholm brings a NW’ly wind which will remain stronger for the boats behind.

“The exciting stuff as far as the watchers are concerned at the TSS zone Ushant and what happens straight after Bishop Rock.” Concludes Van Triest.

Back among the favourites.
After a four year break Horeau, 33, returned last year and finished eighth. After three legs he was fifth and set to hit his target result before a disappointing final leg. He is widely considered a podium contender this season. Part of the reason he took a break was because he was ‘eternally dissatisfied’ with not being able to better his second place on the 2014 general classification but now he is even hungrier for the elusive win.

Sprints for time bonuses.
New on this 53rd La Solitaire du Figaro are sprint bonuses which on Stage 1 come into play at the West Cardinal Buoy Chaussée de Sein. First to pass gets a time bonus of five minutes, second three minutes and third one minute. 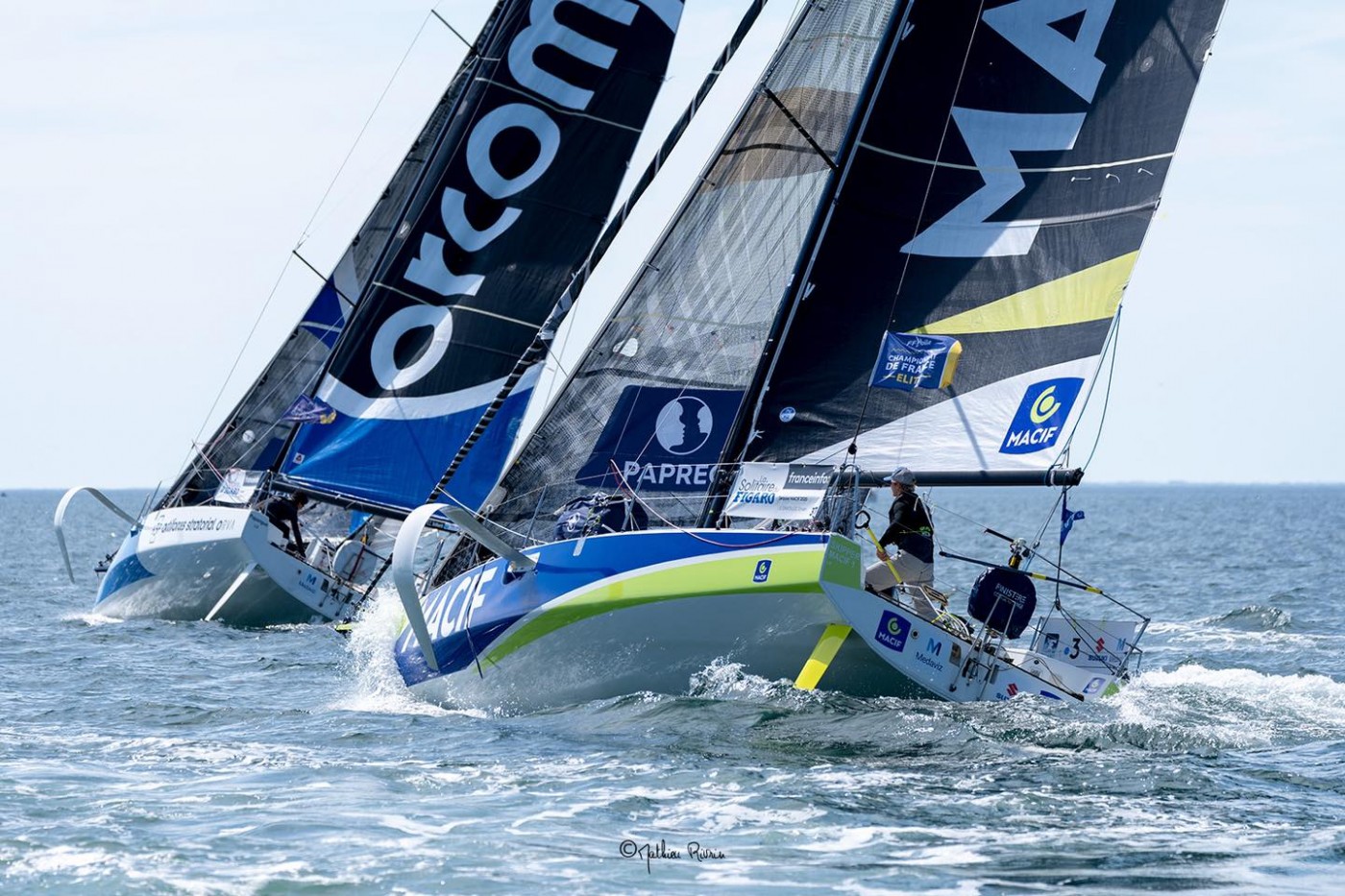 Tom Dolan (IRL,Smurfit Kappa-Kingspan): “It is looking a lot lighter than it was originally expected. The rebounds, the compression and expansions, are going to be even more pronounced. There will be a lot of opportunities to catch up right to the finish. And I am pleased that the start is not having a lot of circuits before we leave as I don’t like them, I like a clean start. That should suit. I feel great, excited and ready to go. Now on my fifth race I know what to expect and I think I get into the race rhythm earlier, how I manage the boat and myself, all comes earlier. The key in the first 24 hours up to the Chaussée de Sein is looking a bit complicated, there are little fronts with different windshifts, so no time to rest, eat and sleep. There can be big speed differences between offshore where the breeze might be and inshore, but getting to the west might be the hard part. All the changes are coming from there but it is complicated to get there.”

Sanni Beucke (GER. This Race Is Female): “I am very, very nervous as there seems to be things going wrong on race start morning. I have been running late because I could not get the weather files, the GRIB files, loaded into my computer. But this will be a very long leg, four nights, but there will be many chances to catch up which is great for me. The whole situation could not be better for me. For a start if you told me in February this year I would be here doing the first leg of La Solitaire du Figaro I would have said ‘No way’ My key watchwords are ‘speed, speed, speed.”

Alan Roberts (GBR, Seacat Services): “I feel great, on form. Over the leg the wind will likely average 10-14kts, but light at the start with not much chance of the thermal coming in. That might let the gradient wind come through or it could be light and we will need to ‘sniggle’ out through the first 24 hours. I like this kind of leg but it will be hard to know what to do. There are so many islands and there are so many options, a little bit of rest crossing the Channel.”

Basile Bourgnon (EDENRED), 1st participation: “This is my first Solitaire. I don’t quite know what to expect. I’m not really stressed. Is that good sign or not? I don’t know but I am going into this with some confidence surrounded by my friends. It will be an opportunity to visit England and Skokholm Island. The conditions are going to be light. For me that is not a problem. We will have to be good in all conditions. I had a good pre-season with good places. There are things that are possible, even if La Solitaire is a special case. I haven’t really set myself a goal, except for the Rookies ranking. Guillaume Pirouelle is my main rival and he was very strong at the start of the year. We’ll see how we both go. And for the general classification, we will see at the end of the three stages”.

A CHRISTMAS PRESENT FOR ALL TRIATHLETES

The City of Evian in the French Alps, and OC Sport - organizers of the La Tour Genève Triathlon and the Mont-Blanc Triathlon - are proud to announce the creation of a brand new event, the Evian Triathlon.

The 18th edition of the International Mont-Blanc Triathlon will be held on 17 and 18 June 2023, starting from Passy. The event gives all triple effort enthusiasts the opportunity to set off on magnificent courses facing the "roof of Europe".

Following the success of the fourth edition of Run Mate by Core-Lean Lac Léman earlier this year, registrations for the fifth edition are now open.