Sometimes it is the early legs of La Solitaire du Figaro which shape the final outcome. But it was a brutally tough third stage, back and forth across the Bay of Biscay to the rugged Spanish coast, which decided 2022’s champion. The 640 miles leg from Royan to Saint Nazaire via Los Farallones on the NW corner of Spain may have been 25 year old French skipper Tom Laperche’s only leg win of this race but his consistency over the first two legs – regularly setting the pace with the peloton – was followed by an outstanding finale showing a true race winner’s superior speed, tactics and decision making complemented by sheer drive and stamina. 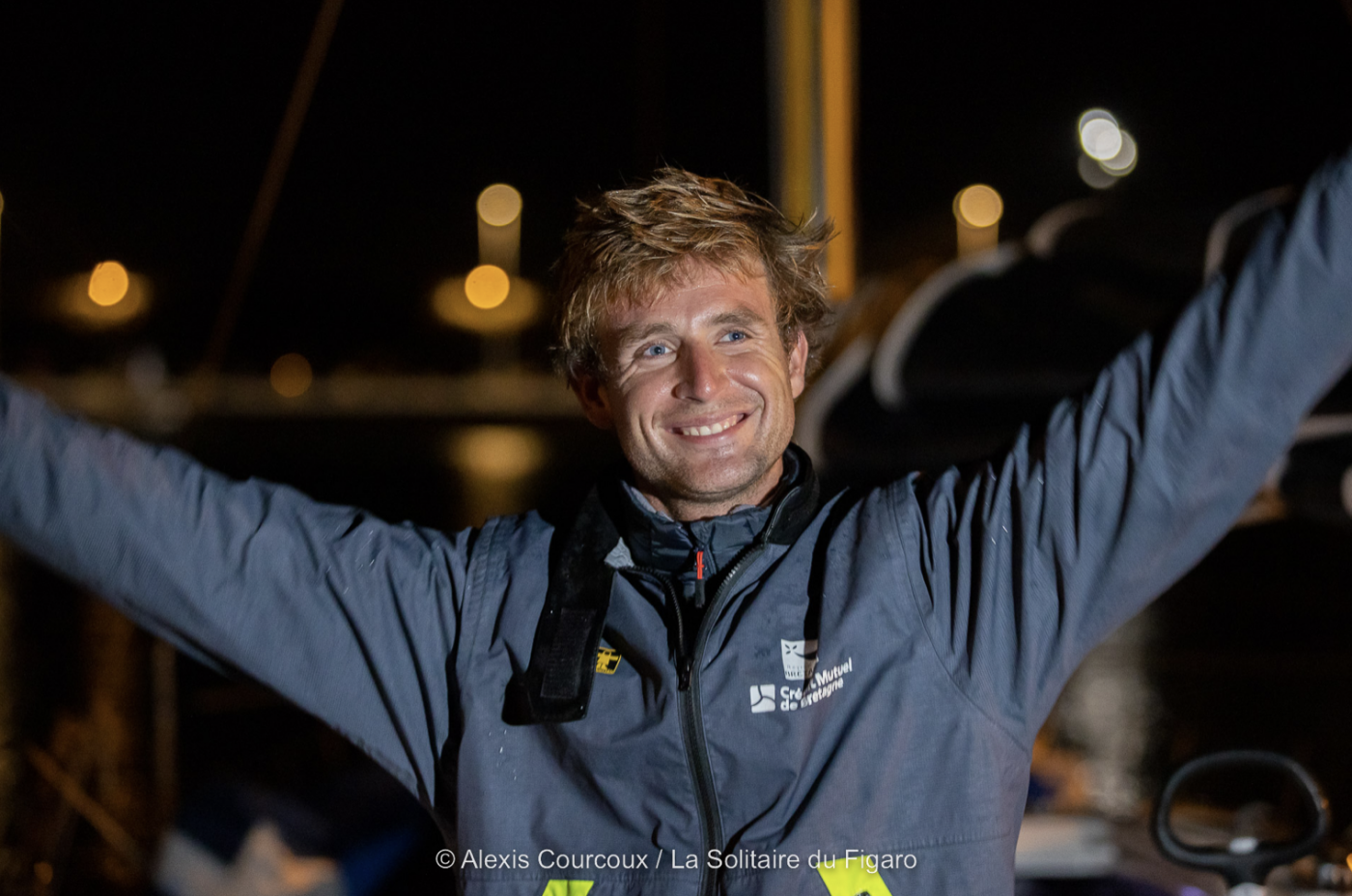 Ninth and third on the first two legs, Laperche said on the dock in Saint Nazaire “ I believed in this victory and I owned my status as the man to beat. It turns out that the first two stages didn’t go as I hoped until this final finish line. Despite everything, I continued to do things without changing my way of doing things and, in the end, it worked”

The Région Bretagne – CMB Performance skipper passed the Los Farallonnes marks with a 29-minute lead over his main rival and then only increased his lead over the peloton, attacking flat out in difficult conditions, “On this leg I felt good. I didn’t feel like I was that tired, my hands didn’t hurt…everything felt pretty easy. It was tough and wet, I fought hard but I felt really serene. Winning both the stage and the overall is perfect. I wanted to finish my last race in the colors of the Région Bretagne - CMB team in the best possible way and it’s done”

He added, “It’s great to be able to get on the Solitaire podium three times in a row. This race is so special, so incredible! I feel a kind of relief. What I did, I did well. Now I’m going to continue learning on big boats”

At the age of 26 on her third La Solitaire du Figaro Elodie Bonafous was very solid on a particularly tough third stage. She triumphed over a hard match race with the Swiss skipper Nils Palmieri to take third. A renowned hard worker she enters the legend of La Solitaire du Figaro becoming only the second woman in the history of the race to stand on a stage podium. Since the race was founded in 1970, only one woman, England’s Clare Francis has won a stage.

Bonafous grinned“It’s all weird, it’s real cocktail of pretty crazy emotions. It was a goal on this last stage to show what I could do and to finish well. Now I am so happy. And so, there we are, it seems I am more gifted in the breeze than in the light, but you have to stay sharp and focused. We trained all winter in Port-La-Forêt in the breeze and that gains your confidence and you progress in the management of the boat. And yes, I had fun! I think I’m really burnt out, there’s the euphoria of the finish which gives me a little boost but I couldn’t sleep at all this morning, I stayed focused on the finish.”

She said, “I had never experienced a leg likes this. It stressed me a lot, I think that even the day I passed my baccalaureate, I was not as stressed, with the fear of a last minute mistake, a broach, a channel buoy, a rock not seen, a fisherma. There is such a release of stress and at the same time full of emotions.”

Laperche left his nearest title rival, Guillaume Pirouelle (Région Normandie) – who had started the stage as General Classification leader with a 16 minutes cushion over him - one hour and 25 minutes behind. Laperche outmanoeuvred his rival in a sequence of light wind transition followed by his timing at a front to lead at Los Farallones in 28-30kts on Tuesday night. Pirouelle takes second overall 1hr 5mn 54 secs behind Laperche and wins the Beneteau Bizuths prize for top rookie. Achille Nebout (Amarris-Primeo Energie) is third overall 29mins 3secs behind Pirouelle.

Palmieri said, “I am happy to win the trophy but It was not in my objective, my goal for this Solitaire. My objective was really to sail my own race, doing my stuff, trying to sail with my strengths and weaknesses, and I did it and in the end the result is nice. I’m really happy to be in the top ten, and to win the Vivi trophy is really good because Switzerland is a great offshore racing country, so it’s really nice to be first among all these top French sailors. This is my last year with Teamwork on the Figaro. I might sail next year without Teamwork.”

Dolan was fifth going into the final leg but feels he did not have the courage of his convictions during the key stage – the transition and front. Having set himself up in the south – like Palmieri who finished fourth – the Irish skipper chose to stick with the leaders and ended up between the two strategies, going on to cross 15th, just behind Spain’s Pep Costa (Team Play to B-Terravia) and ahead of Briton Alan Roberts (Seacat Services).

Dolan recalled, “Seventh is good, still a top ten but I feel disappointed in the last leg, I made a stupid mistake. I made a point of positioning myself to the south of everyone, to leeward of everyone which was the plan so that staying south I would end up to windward of everyone just like Nils did and I chickened out when I heard the ranking, the classement, I heard I was well placed and panicked and thought I should do the Figarist thing and stick with the leaders and that is exactly what I should not have done. I should have stuck to my guns.”

Pep Costa was among the leading group on the leg, just as Dolan also led the stage at different but the 23 year old Catalan is 20th overall. Roberts in 19th is disappointed to have not done better considering he was strong in all the pre-Solitaire races.

“ I am upset and disappointed, I don’t really know what happened right now because I finished top five in all the solo races this season. If I knew what I was doing wrong I would not have kept doing it on three legs. It is not for lack of wanting it, not through lack of working hard enough. I don’t even think it was through lack of boatspeed. It seems if there was an option I always ended up in the place which wasn’t right. I did not think it was obvious what the winning options were. It is disappointing because I did feel I could have podiumed.” Roberts concluded.

Costa, who has shown flashes of brilliance and usually been up in the top ten before fading towards the end of legs said, “It was a tough leg, very tough as it was so windy coming from Spain, it was full on downwind which was wild. I learned a lot though and it is good. I had some little problems with some sails, but overall the Solitaire was a good one, even if the result is not what I hoped for. I was always in the front pack and I think we need some details to stay there for the whole of stages next year. I was in the top ten at the Spanish mark. I feel good with the boat and everything, I just need some details.”

Germany’s Jorg Reichers (Alva Yachts) was 21st overall after finishing fourth on the first leg “My goals in terms of the Vendée project was to race and learn and to finish in the top 20 and I finished 21 so that is not bad, I think I could have sailed better. On the way back I was pretty good but made too many stupid mistakes, I had the spinnaker fly free in a 30kt gust which was not helpful and some technical issues like lashings for my genoa sheet opening, it was hideous. A minute lost here and there becomes big losses.”

A CHRISTMAS PRESENT FOR ALL TRIATHLETES

The City of Evian in the French Alps, and OC Sport - organizers of the La Tour Genève Triathlon and the Mont-Blanc Triathlon - are proud to announce the creation of a brand new event, the Evian Triathlon.

The 18th edition of the International Mont-Blanc Triathlon will be held on 17 and 18 June 2023, starting from Passy. The event gives all triple effort enthusiasts the opportunity to set off on magnificent courses facing the "roof of Europe".

Following the success of the fourth edition of Run Mate by Core-Lean Lac Léman earlier this year, registrations for the fifth edition are now open.