Saint-Nazaire, on the French west coast some 40 miles west of Nantes, laid on perfect conditions for the start of the 52nd edition of La Solitaire du Figaro. Light WNW’ly breezes of 10 to 12 knots and flat seas at the mouth of the Loire Estuary ensured that the 34 solo skippers were allowed a relatively straightforward opening to the 627 nautical miles leg downwind across the Bay of Biscay to a turning mark close to the NW Spanish coast at La Coruña and back to Lorient.

The stage got under way after one general recall in what France 3 commentator, Vendee Globe racer Clarissa Cremer described as “champagne conditions”. Bright sunshine, moderate winds and blue skies gave the fleet a brisk opening circuit to the La Solitaire du Figaro buoy where favourite Tom Laperche led the fleet towards the open sea and the Rochebonne mark. Britain’s Alan Roberts and Ireland’s Tom Dolan were well placed.

While the course is broadly an extended windward-leeward to the windy corner of Galicia where big seas are likely to prevail followed by a long slog back upwind, it might be the tactical decisions and timings how best to deal with three exclusion zones – set up to prevent competitors straying into a French Navy exercise – that shape the final podium. But most weather advisers and their skippers concur that a final shut down of the breeze on Thursday afternoon might actually prove decisive.

“After all these four days and nights at sea it could be Heartbreak Hotel in Lorient that some of these guys and girls might be checking into in Lorient.” Grimaces Marcel Van Triest, meteo adviser to one of the biggest race groups in the fleet, who has been instrumental in the winning strategies of Armel Cléac’h in 2020 and Yoanne Richomme in 2019. “It will all be about the timing getting to Lorient. As it looks just now if the leaders can be in by around 1300hrs then it can be fine but after that there is a big hole in the breeze develops from the west, and then three, four, five o’clock in the afternoon there will be next to nothing until seven or eight in the evening. That is going to be pretty hard to take after doing all that sailing.”

“We have a massive high filling in from Norway with a big ridge towards the Azores, that means the wind will go right to become NNE but it is all downwind to the waypoint of Spain. From the start to the mark at Rochebonne it is fairly straightforward. There might be a little gybe to get to the mark there. From there to Spain it can be a little tricky because of the exclusion zone. During the night to midmorning we might see some differences in how people get to the forbidden area. When to place your gybes is key and there can be some differences. By tomorrow morning everyone is going west into the building breeze to find the layline to the mark.” Van Triest outlines.

The breeziest, bumpiest section of the course will be in and out of Ouest Farallonnes cardinal mark at La Coruña where the wind will be over 30kts. Downwind will be about maximum time driving and keeping the boat fast while there will be time to recover and rest on the long beat back when there is not much to lose and gain. At the latitude of about Les Sables d’Olonne, so abut 180 nautical miles upwind, the choice needs to be then made to go south, north or between the no go zones. “It could be that the leaders extend as we get across Biscay, but right at the end there could be the first few boats getting in and the rest having to wait to get breeze. This leg will not be over until it is over. And it is La Solitaire so the key objective is not to lose the race on the first leg. Looking at the exclusion zones, through the middle seems the least risky option. But I am sure people will try stuff. It is La Solitaire. My aim is to keep it simple, to come out at the end of it still in contact with the title.” Explains Alan Roberts, the British skipper of Seacat Services. “The key to this leg will be being near the front of the top group at the turn at Spain.” Says Ireland’s Tom Dolan, skipper of Smurfit Kappa-Kingspan, “The elastic will stretch a lot. Upwind the boat does not accelerate a lot. The wind shifts left in the afternoon and the main thing is to be doing your starboard gybe at that time and not be heading into the exclusion zones at that time.”

Groupe SNEF’s Xavier Macaire, the French skipper who won Stage 1 of this race last year, is among the favourites to triumph this year and is very much on form having won the Solo Guy Cotten, the final circuit race before this La Solitaire du Figaro. Before leaving the dock he said “these zones don’t change the course completely but you have to adapt. I don’t see it as something to constrain us but it adds to the game. That is the main thing about our sport, you have to know how to constantly adapt, whether it is to the weather conditions or to the course which may change the day before the start.”

Asked about his ranking among the favourites Macaire, the leading light of the Team Vendée said “given my start to the season many give me the status of favourite and I want to live up to that. I want to win this. That is true. I want to focus on what I’m doing myself without looking too much at the competition, like I did on the Solo Guy Cotton, always trying to exceed my own limits, to make good courses and to always look ahead and to be always faster and more efficient.”

Tom Laperche (CMB Bretagne Performance) finished third in 2020 on his second La Solitaire du Figaro and is widely tipped in France as a likely winner. “This is an elimination race. You have to be consistent, and not lose it from the start. My goal is but no one is immune from having a shocker on this race. I know it’s going to take some risk to be able to make the difference and win. I’m ready to do that ” says 24 year old Laperche.

Twelve rookies took to the start line today on a long leg which should prove a relatively straightforward introduction to the unique challenge of La Solitaire du Figaro. Among them Catalonia’s Pep Costa (Cybele Vacations-Team Play 2 B) hopes to acquit himself well “I feel good. It is such a big race but I have done everything I could in terms of preparation. I am very young compared to some of these guys. I think I have been doing well in training and my speed it good but I will just try to take it as it comes.” Said Costa, 22. 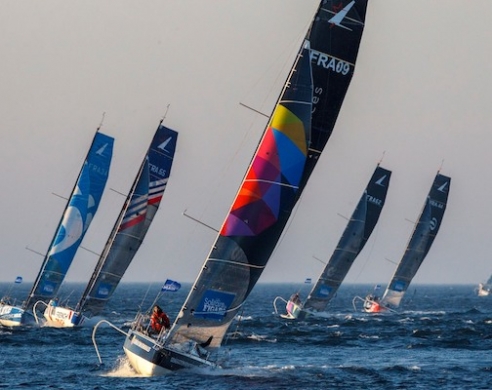 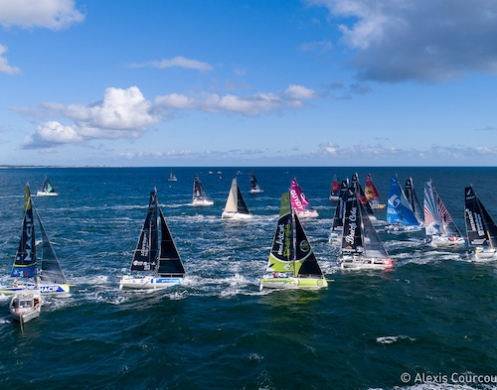 Entries are now open for the 16th edition of the Transat Paprec – the first ever transatlantic race for mixed male/female double-handed crews, starting on April 30th, 2023.